My first interview in the series of Outlander- the fans who make it – is with Dorianne Panich, one of the people behind Outlander Homepage, a fan site with 26K followers on twitter.

● Please tell us about yourself (name, age, country where you live, profession, hobbies, etc…
My name is Dorianne Panich, I’m 53, from the East coast of the USA. I live in the suburbs around NYC, in New Jersey, about 7 miles outside Midtown. My husband and I both work in the city.
I am a Hair Colorist in salon, (26 years) and a Hair Stylist, when I can get the work, doing Ad shoots with an industry management company…
I guess I would say, my hobby is my work since I have 0 time for anything else, but I am an animal activist with the ASPCA, (mostly financial donations) and I’ve got 2 rescues at home who dominate my life along with my Husband, Jaime, who is the love of my life.
We (hubby and I) ride Harleys, which is how we met through our motorcycle chapter.
I also run and cycle as much as I can, which keeps me sane.

● What made you start the Outlander Homepage site and can you tell us a little bit about that?
Wow, Outlander Homepage has been a journey….
I originally started the site with my friend who is a writer in 2015, (she is no longer involved with the blog) after chatting in an Outlander group for a about year regarding the upcoming show, and then about the show versus books during season 1. This was a chat group about the Outlander books, when it first came to Starz, (with other like-minded book lovers) since Diana’s books have been out for 20 years.
Incidentally, these ladies all went on to have their own successful sites, Outlander Central, Outlander Headquarters and Whiskyisms.
We had talked about doing and eventually did our blog in order to be invited to the Premiere as a fan club, since the NYC event was coming up that Fall. (Yes, we were sent the passes to the season Premiere.)

● What do you like most about the Outlander books and show?…
The story of course, but the love for the show was so visceral after seeing our characters on screen, that the blog exploded with interest. People who loved writing about the characters and storyline especially, vying for space to express their thoughts, Artists too. I have a love affair with creatives, so I include all the Outlander art and writing I can find from the talent on social media.

● How much time do you spend every day on Outlander?….
I am personally not a writer.. I am strictly visual due to my occupation, I handle getting in touch with the actors for interviews and then adding graphics which set up the articles. I also handle, what news is picked up on the blog from what’s being featured that week on Outlander Starz, and in what order things are published. Aside from the notifications on social media, so a few days a week.

● How has Outlander affected your life and/or lifestyle?….
Our first cast follow was Graham McTavish on our page. He created the opportunity for the rest of the cast to follow Outlander Homepage, Lotte Verbeek followed us soon after and since that time 4 years ago, we have many of the cast following us and from every season. As a result we’ve managed to do many interviews too! Saltire Comics was our first, and Graham was our second. Getting to know these creative souls has been an interesting process. It’s like getting to see their life from a personal perspective, and has enriched all of us who participate on the blog.

● What made you decide to start doing the “Outlander in the city” charity events and can you tell us about the events you have done so far?….
From that first cast follow, we had the idea to do a charity benefit for Graham McTavish using his ambassadorship with Action for Children. My friend Lisa Michelle Woody of Outlander Forever, knew he would be in Manhattan in October 2016, so we got in touch through our page and he agreed to attend.
Our charity events were inspired from a kinship with the cast from pure Outlander love. We realized the actors had charity interests from their Twitter posts, with the actors on social media showing excitement for our book characters, as they were each cast in their roles on the show. It seemed natural to explore doing fundraisers as a way to bond with our favorite characters and the actors playing them, while doing the charitable thing.
We have successfully organised 3 charity events as a result of that first, over the past 2 years, with all of the main Outlander cast including Sam and Caitriona attending. We mingled with the actors while raising money for very worthy causes and to date have raised approximately $75,000.00 through these dinner events. Each were soul giving, that meant the world to us to organize and hopefully more to come. Our events have introduced fans who became friends and my production group who became sisters for that space in time, and it was magical.

● What do you like most about the Outlander books and show?….
My sister in law Kim Murphy, an Irish lass, introduced me to the Outlander series about 15 years ago. I am of Celtic origins as well. My father is from Ireland and his mother is of Scottish descent, her surname played a role in Scotland politics during the period of Robert the Bruce and I believe goes as far back as 10th century Scotland, so it’s my lineage. Who doesn’t love the thought of going back in time and having the attentions of a Highland warrior when your ancestry links you to it.

● Which character in Outlander is your favourite?….
Wow, my favorite character has to be Lord John Grey… He’s witty, and let’s not forget, educated, loyal, honorable, a soldier (so) brave and handsome.

● Which actor did you enjoy meeting the most?…..
Nell Hudson was just the sweetest. Although Caitriona Balfe was a very close second…
Nell is a “girls” girl, and so am I. She was such a sport at our event. She was exhausted as filming the show “Victoria” was ongoing and flew in and out in 24 hours. She was honest, really cool, and a fun spirit. 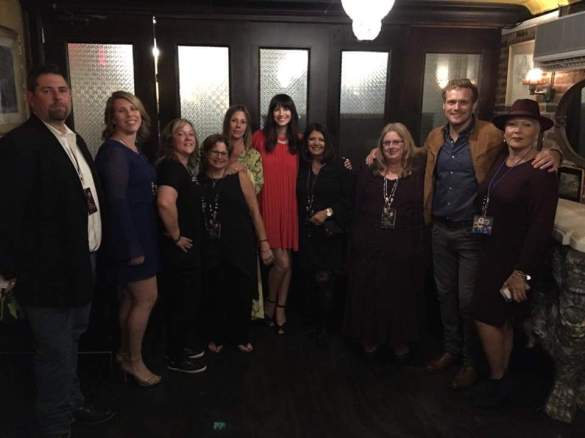