My next interview in the ‘Outlander-the fans who make it’ series, is with Karen Jeanne (@purpleiris13) who, along with Summer (@SummerPic), makes amazing Poptoons and Videos of the Outlander show and posts them to Twitter, for all of us to enjoy. Karen Jeanne and Summer decided that it should be KJ who does the interview for the both of them.
I have not had the pleasure of meeting either of the ladies, but I have enjoyed their art and humour very much in the past few years.
I hope you enjoy the interview, as well as the samples of KJ’s and Summer’s art. If you would like to visit Summer’s video channel, here’s the link: https://m.youtube.com/channel/UCsEomwuL9ih3J_JOoSuDq_Q

• Please tell us about yourself.

The basic facts are pretty boring—I’m married to my college sweetheart, have two adult children, and have always either been an actress, a director, or a teacher of theatre, film, and writing at the high school and college level. I come from a family of genius mathematicians and engineers, and I’m the black sheep. About 15 years ago, along with a few other like-minded teachers and administrators, I started a charter high school for at-risk kids. High school can be a misery if you feel like you don’t fit in, and lots of teenagers feel like they don’t fit in. The problem is the school—not the kid. But I digress…

• What made you and Summer start the POPtoons and videos, and can you tell us a little bit about that?

We were in the middle of the second Droughtander—the insanely long one between Season 1 and 2. We were all just trying to amuse ourselves and kill time, so I got interested in making memes and begged @Bouton_Barks, who is a master of the art, to teach us some meme-making skills. I was making some rather pathetic edits, with speech bubbles, when I noticed Summer creating these fake Funko Pop versions of the Outlander characters, using Photoshop. I thought her work was fantastic, and the little dolls with big heads and no mouths were hilarious, so I started to use her pops and add titles and speech bubbles, with the intent of making her laugh. That was always the goal for me—cracking Summer up. We became creative partners. Summer does the art, and I do the writing. At first, we were just putting Outlander character pop dolls, with titles and captions on Twitter, and tagging the actors who played the characters. The actual scenes came later. We didn’t just use the pop characters; longtime Outlander fans might remember the barnyard series, with Shaun the Sheep-style animals. Many of these included the Outlander characters, or actors in key roles, and that’s where we began to refine our style. Eventually, we were churning out recaps, previews, bloopers, highlights, spinoff series ideas, reviews–anything that struck our funny bones. Most of the time, I would get some idea for a scene and toss it around with Summer. She’d create the art, we’d make a few changes, and then I would write the titles, captions and speech bubbles. If I made her laugh, the scene was a winner, and I would tweet it. At the height of our creative powers I was probably tweeting 4-5 poptoons a week. And then Summer began making these complete music VIDEOS with pop characters that moved…!
It’s a rush when the actors or crew notice, like or retweet one of our poptoons. Diana has been wonderful; she has retweeted (and even ROFL’ed to) dozens of poptoons, and several of Summer’s videos over the last couple of years, and is probably getting sick and tired of seeing those big heads. Rik has been the most enthusiastic audience; he tweets back and has told us several times that he loves the poptoons. Sam has liked and retweeted a few poptoons and videos. But the fans have been the best audience of all.

Not as much as I used to! My family is very grateful.

• What do you like most about the Outlander books and show?

I’ve read all the books, including the first Outlander Companion, the graphic novel, all the Lord John Grey novellas and books, and the other Outlander-related novellas. I’m working on the Outlander Companion Volume 2 and rereading Drums of Autumn. It sounds like that’s the only thing I read—but it’s not. I am a voracious reader; I always have at least two (and often three) books at hand. But I’m compelled to say that nothing else I’ve read has engaged my attention and my heart over time the way the Outlander books have done. I’ve reread some of them so many times, that I can quote whole sections.
I think we are very, VERY lucky to have a TV series based on the books. God bless Ron, Maril, Matt, and Toni for taking on this mammoth project and putting up with fan feedback. Unless you have adapted a popular multi-character book series, that sprawls over several countries, hundreds of locations, and two different centuries, you have no idea what these folks are accomplishing. You will never hear complaints from me about what’s been left out or altered; I can fill in with the books anytime I want the complete story and my own vision of events.

• Which character in Outlander is your favourite?

Besides Jamie? William. Seriously. I love that kid. He is very much what I imagine Jamie to be like as a young boy and teenager, especially if Jamie found out that everyone had been lying to him for years about his parentage. I have always had a soft spot for the at-risk kids. I can’t wait to do poptoons for him.

• Is this the first fandom you are a member of?

Yes. Well, wait, that’s not completely true. I was a huge fan of The Monkees. I spent hundreds of dollars on fan magazines like Tiger Beat and papered my walls with photos that I cut from the magazine pages. (Before Facebook, Pinterest, and Instagram, obviously.)

• What made you decide to join this fandom, rather than any other one?

I read all the books around the time they came out. I watched the first TV episode in real time. I got sucked into the Outlander family back in 2014 because a fan named Dede used to run an addictive contest called Outlandish Trivia, and I became obsessed; I have a completely annotated and sticky-noted Outlandish Companion that I used for research. I met some awesome fans through the contest and began to spend more time on Twitter. It spiraled out of control after that.

• Have you been to any Outlander fan events or Cons and met any of the actors or Diana? If so, who did you enjoy meeting the most? If not, who would you want to meet?

I first “met” Sam when I was lucky enough to win a contest to become one of the Sam’s Fan Follows. I’m sure there are many fans who don’t know what that is, but back in 2014-15, when the show was just getting started, Sam had about 50,000 followers, and he was much more available to fans. He would follow a fan for a week, and then she got to choose the next fan he would follow. Poor Sam. We broke him. Or at least I did—I was SFF #6. There were only seven of us, because it took a huge amount of time and energy to engage with one fan at a time, and keep replying to our direct messages. He was extremely gracious, funny, kind, open, and tolerant. When my husband and I travelled to Scotland later that year, we relied on Sam’s list of “Things to Do in Glasgow”, which he wrote out for me when I asked for his insider suggestions. Sam is a genuinely good guy, in case anyone wonders. He also does normal things that normal people do—he’s no diva.
I met Diana soon after that—she came to a fundraiser which the Oregon-based Outlandia fan group set up to support Clay Street Kitchen in Portland. Diana is amazing: she wandered around on her own, meeting and chatting with fans, like she wasn’t even a goddess or at the very least a VIP. She and I chatted about seeing plays at Ashland (she had just returned from seeing a few) and revealed where she bought her clothes.
Summer and I met face to face for the first time when we decided to go to the Outlander fan event in NYC in September of 2017. Neither of us has a fan-event type personality, because we are both introverts and crowds of strangers make us nervous, but that weekend was great. Even though we got to meet and get hugs from Caitriona and Sam (and we met Sam twice that weekend—at Orvis AND at Papillion) and even chat with them for a minute, the highlight of that weekend was meeting Summer and hanging out with her and the other awesome fans also attending the event. (Shoutout to the Jersey Girls!) Caitriona is a natural beauty, warm, genuinely interested in every single fan, and absolutely focused on you when you meet her. Sam is an epic hugger—just as everyone says he is.

• What keeps you connected to the Outlander fandom?

I just want to have fun. This fandom has brought me fantastic new friends, fun times, and lots of entertainment. I see some fans on Twitter getting into arguments about how to be a fan, sniping at each other, attacking cast, crew, writers, producers, significant others, or fellow fans, and generally behaving in surly, middleschool-ish, unkind ways. The fandom feuds mystify me. I’m scrolling past all of that…If it’s not fun, why are we here?

• What do you and Summer have coming up next?

We’re still slowly releasing a top-ten highlight reel for Season 3, one by one. Summer has done all the art for that series and I’ll add the titles, captions, and speech bubbles and tweet those between now and the Season 4 premiere. Starz has been very miserly in terms of releasing any bits of Season 4, so we’re retaliating by creating our own Season 4 preview scenes; we’re just making stuff up using the book as source material and trying to avoid blatant spoilers, which is quite a challenge. 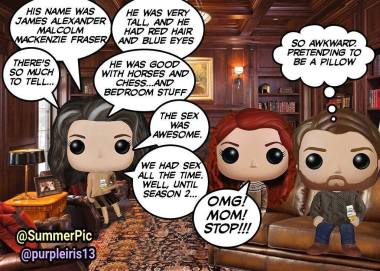 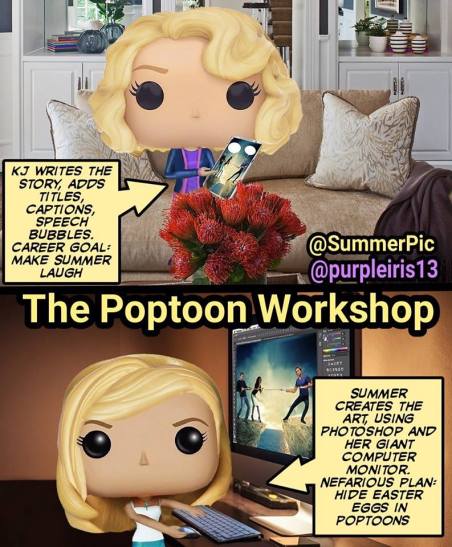 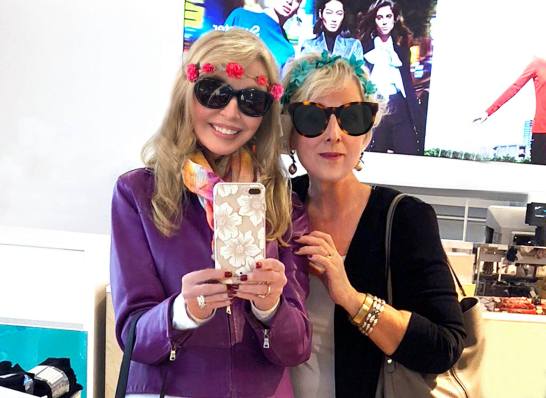 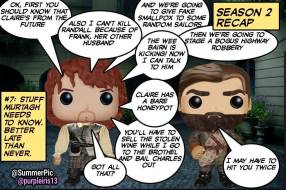 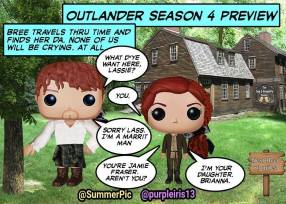 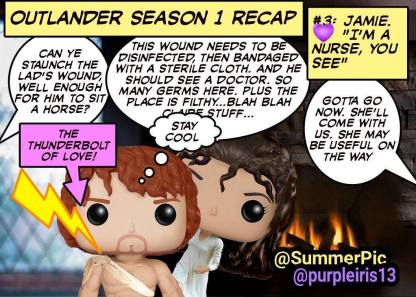 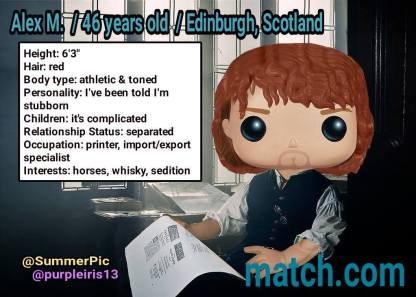 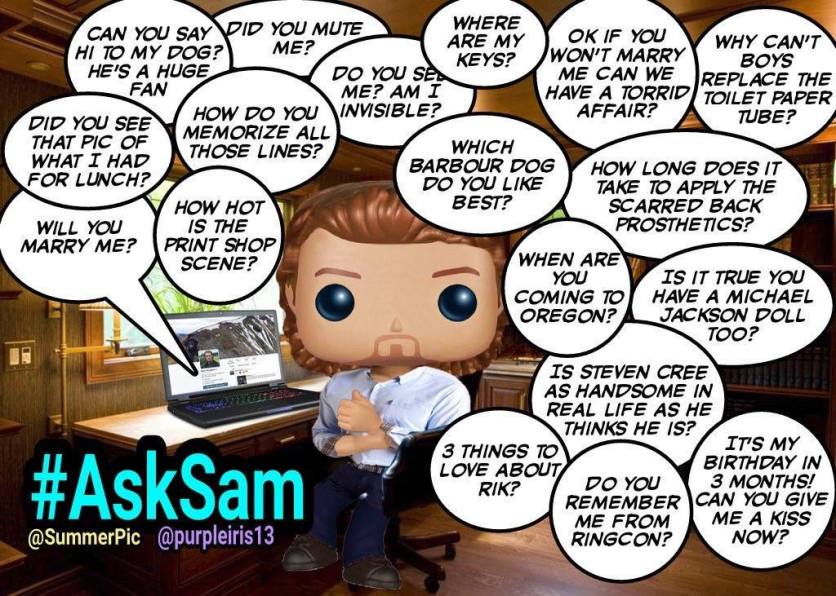