The next interview in my “Outlander- the fans who make it” series is with Deborah Kennedy, who I have met a couple of times at Conventions in England. I am also the proud owner of one of her “pickle pins”

• Please tell us about yourself.
My name is Deborah “Debby” Kennedy. I live in a suburb of Pittsburgh, Pennsylvania in the US. I’m a retired high school Social Studies Teacher. In my career of 33 years, I taught nearly a dozen courses, developing two of them. In my career, I also co-directed 28 school plays, writing two of them. For 16 of my summer vacations during my teaching years, I coached softball for little girls in my community.
My hobbies include researching my ancestry, playing golf and singing in my church choir. For many years, I wrote 76 fan fiction stories in the “Dr. Quinn, Medicine Woman” fandom, mostly after the show was canceled. I’ve also enjoyed portrait drawing, painting and playing guitar, though I’ve gotten away from them lately.

Here are some samples of my drawings:

As for my age, I used to tell my students if they wanted to know how old I am, they’d have to look up the Academy Award for Best Motion Picture in the year I was born. It was “The Greatest Show on Earth.” I also informed them that I had a theory about the Best Picture Oscar being a determining factor in a one’s personality. That didn’t sit well with my students who had been born in 1975.

• How long have you been an Outlander fan?

I was introduced to the books in 2013, when a longtime friend in the Dr. Quinn fandom, Laura Dickey, urged me to read the first of Diana Gabaldon’s books. Within two months, I had read the 7 that had been published up to that time. Diana was releasing book 8 with an appearance in Seattle, Washington in 2014. It happened that Laura, then a commander of a Coast Guard cutter in Seattle, invited me to stay with her and attend the release of “Written in My Own Heart’s Blood.” I went, of course!
While there, Laura asked if I thought Diana might enjoy a tour of her ship. I replied in the affirmative, so she sent an email to Diana with her phone number. It didn’t take long for Diana to call and accept Laura’s offer! The next thing I knew, I was tagging along in the surreal experience of touring a Coast Guard cutter with its captain and my most favorite author in the world!!! Diana was snapping photos of things with her phone, but I encouraged her to be IN the pictures! So, I took several photos of her with her phone. One is kind of iconic, as it is of Diana sitting in the engine room of the ship. She has used it as her profile picture on Social Media.
Around that time, Diana began to follow me on Twitter. I think it might have been an accident on her part, but she’s stuck with me, and I’m honored by her patience with me. 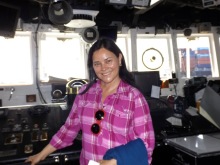 It depends on the time of year and airing of new episodes. I’ve really gotten sucked into the “black hole” of Social Media, following Diana, the cast, production people and several others associated with the show. I think I’m too embarrassed to comment on how much time that involves. I probably most engage with Terry Dresbach in her Costume discussions. I think I was the first to teach her about emojis on Twitter and, because she’s not a fan of so many hearts for liking things, I use a PIZZA emoji with her.

I most love that at the heart of the books is a timeless story of two characters who despite every challenge, tragedy and turmoil they’ve faced, are purely and totally devoted to one another. I most love that the show has cast such superb actors in the roles of Jamie and Claire.
I least like what happened to Faith and the Claire-Lord John “event” in book 7. In the show, I don’t like that the number of episodes per season keeps declining, but for the sanity and health of cast and crew, I do understand it.

• Which character in Outlander is your favourite? Please explain why.

I have to pick Jamie and Claire together as my favorite! The couple is everything. As Claire once said, “Bad things tend to happen when we’re apart.” Their journey in the books encompasses every aspect of the human
condition. War, adventure, romance, tragedy, heartache, history, religion, philosophy, family, marriage and a bit of science fiction thrown in.

• How has Outlander affected your life and/or lifestyle?

It has prompted me to travel to Scotland several times, along with Ireland and England. Scotland has gotten into my soul. Through my genealogy research, I’ve learned that I have mostly Scottish and Irish ancestry. It’s in my blood, literally. I was diagnosed with hemochromatosis two years ago. It’s nicknamed “the Celtic Curse,” and it is the most undiagnosed genetic disease in many countries, including the United States. I’ve become an advocate for people of Celtic ancestry being tested. It can save lives!
In addition, I’ve met some wonderful fans along the way. There is a sort of shorthand with fans of Outlander. It’s like you don’t have to explain why you’re at a convention or gathering. EVERYONE “gets it.”
I helped to form an Outlander group in Pittsburgh, and it’s grown to over 600 members. We raise money for the St. Andrew’s Society of Pittsburgh and for the charities of Sam and Caitriona. By the way, our name is “Ahtlander”, because Pittsburghers speak with a unique accent (actually influenced by the Scottish settlers who came here). In “Pittsburghese,” the word “out” is pronounced “aht.” Pittsburghers also use the word “yinz” for “you all.” Thus, our nickname is “Yinzers.” In Ahtlander Pittsburgh, we have Yinzernachs and Ahtmanders.
I’ve attended numerous fan conventions and have met the cast several times.
Because the cast started to appear in so many fan conventions and gatherings, I also founded Outlander Events, a sort of clearing house website, Twitter and Facebook platforms for fans to find everything in one place. Fans can follow Outlander Events on Social Media and on the Internet to see photos and videos of my encounters, plus find out what’s on the horizon with cast appearances. The URL of the website is: http://www.outlander-events.com

• Is this the first fandom you are a member of? What made you decide to join this fandom, rather than any other one? What do you like and dislike about this fandom?

I was a devoted fan of “Dr. Quinn, Medicine Woman.”
I think it was a rather organic set of circumstances that drew me into the Outlander fandom. Once you read the books, that’s a major step. The engagement of the cast and crew with fans made it more fun, as did attending events along the way.
I like that this fandom has done such great things for charities! Millions of dollars have been raised. Through Sam’s charity, hundreds of people have improved their health and lifestyle. The fandom can be very supportive of one another, creative in their works and wow, can WE VOTE for our show and its stars!!!
I least like that fans can be quite judgmental of the actors and of one another. As a teacher, I observed that sort of behavior quite a bit in school, but to see it happen among grown women just horrifies me.

• Which personality (Diana and the actors of Outlander) did you enjoy meeting the most?

That would be like asking a mother who her favorite child is! Again, I cannot pick one. I call Diana, Sam and Cait the trinity. They are gracious, generous, friendly, funny and charming. They’ve never turned me down for a photo, autograph or just a brief hello.

• I know that you have met Diana several times. Would you like to share something about your meetings with her?

Please see my answer to your second question. Touring the ship!!! My first meeting came in Tempe, AZ in 2013 when she autographed the first book for me. (See the photo with “Psycho” over my shoulder) My second meeting was at the release of MOBY (and ship tour). My third was at her hotel in 2017, when she took time to share a beverage with my friend Arlene Boeree and me at her hotel. That’s when she got her pickle pin!

• What keeps you connected to the Outlander fandom?

I think working with the Pittsburgh Ahtlander group keeps me connected locally. Certainly social media helps to connect me internationally. Also, several of my best friends are big fans like me!!! Arlene, Nancy Tucker and I love to do Outlander
tours!

• What do you have coming up next?

I’ve been so blessed to have the opportunity and means to attend nearly all of the fan conventions and premieres. As long as they continue to have them, I hope to be there.

Some background info on the pickle pins and how you give them out to fans and why?

In 2015. the first Outlandish UK Gathering was held in Scotland. Fans discussed bringing something for a grab bag gift that tied in with where we are from. This idea prompted me to consider something that Pittsburgh is famous for, and among its many corporate
standouts is Heinz, maker of ketchup, baked beans and pickles. At the 1896 Worlds Fair, Heinz Company handed out pickle pins as an advertising gimmick. They became so popular, that people started to collect them. SO, I brought pickle pins to distribute
to the fans as a token of friendship from Pittsburgh. I’ve given out close to 1,000 pins to fans since then. Ron, Terry, Diana, Sam, Caitriona, Tobias, Richard, Sophie and most of the cast have them, as well.